Many University of Missouri-Columbia students and alumni along with others have tweeted out opinions about the recent MU Greek Town proposals.
The account @StopLoftin was created to spread news about the move; the account, which is run anonymously, sent its first tweet was on June 1. Loftin, whose twitter handle is @bowtieger is the MU chancellor.

Stop Loftin
@stopLoftin
Let @bowtieger know that Greeks will not just sit back and watch him destroy our amazing Greek system. #StopLoftin http://t.co/DCaeNwNRXF 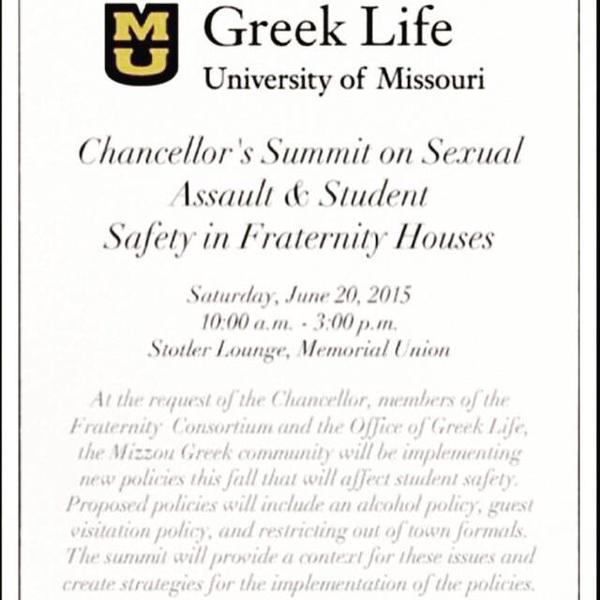 Jun. 2, 2015
The Mizzou PHA is the Panhellenic Association that oversees campus sororities. The account for the Intrafraternity Council hasn't tweeted since March.

Mizzou PHA
@MizzouPHA
For more info on our views on the recent policy proposals and the upcoming summit, refer to our joint statement http://t.co/kQc0a7MJRe
Jun. 5, 2015

Ryan Baris
@Ryan_Baris
.@bowtieger Do you honestly think telling women when and where they are and aren't allowed to go is a sound solution to the problem?
Jun. 4, 2015

Ryan Baris
@Ryan_Baris
.@bowtieger I propose we also ban women from entering parking structures after 10 p.m. We have to keep them safe, you know?
Jun. 5, 2015

Meagan Myers
@meagannrae
Huge thank you to @Mizzou to reminding me how weak I am as a women and how I can't make any decisions about my safety on my own
Jun. 3, 2015

CW Matthews
@chuckstar1855
That being said, I appreciate @Mizzou and @bowtieger making an effort to combat a disgusting cancer on college campuses. Seriously.
Jun. 3, 2015

Carli Kozik
@carlifries23
Deeply saddened by the ignorant restrictions that Mizzou's greek community will soon have imposed upon them @SaveMUGreekLife
Jun. 4, 2015

Cole Edwards
@_ColeEdwards_
The proposal regarding fraternities at @Mizzou is egregious and unfair. Fraternity membership is NOT synonymous w/ drugs or sexual assault
Jun. 4, 2015

Liz Folken
@lizzerdO
@Mizzou You should consider the whole University when addressing sexual assault. Greek life makes up 22%..how is the other 78% not involved?
Jun. 3, 2015

Molly Evans
@molly_evans96
Is @Mizzou a school? These new and insane rules being discussed make it feel more like a prison. Just let me know.
Jun. 4, 2015

Michael Farr
@MichaelFarr4
It is so cool to see the Greek Community at Mizzou already standing up for itself. @stopLoftin @SaveMUGreekLife
Jun. 4, 2015

Rebecca
@rgale4292
I think your bow ties are cool but your ideas......not so much @stopLoftin #impeachloftin
Jun. 4, 2015
Even people who aren't Mizzou students care about the issue.

Katie Masters
@Kayteekats
I am not a @Mizzou sorority woman but I am 21 & sick of not being consulted on what is "good for me" https://t.co/j3d1LAT8xc
Jun. 4, 2015
-- By Jack Witthaus, jwitthaus@post-dispatch.com