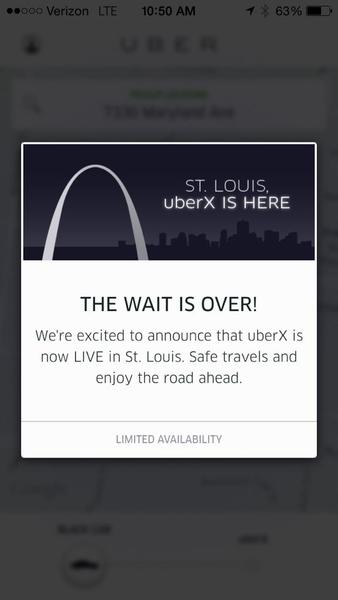 Via Leah Thorsen, of the Post-Dispatch
by The Weatherbird
Have you Uber-ed yet?

I'm not sure Uber is a verb. Maybe one of the users of the ride-hailing app can let me know. The service has been in the news for its struggle with the St. Louis Taxicab Commission, which has refused to let it operate in St. Louis. On Friday, Uber had enough — the service filed a lawsuit against the commission and announced it would being offering rides in St. Louis.

I asked if people were using Uber, and for their reaction. Then Adam Hallas (@MrHallas) called me a narc "in pure jest." Other responses:

C.L. Melkus
@teenmethuselah
@Weatherbird Operating without permission is not moving forward. I am disgusted by the intractability of the situation but this is no fix.
10:45 AM - 18 Sep 2015

jim ruebsam
@jruebsam
@Weatherbird There is a charity pub crawl in Soulard tomorrow, and @Uber will be the DD for a lot of folks. STL roads are safer with Uber
11:01 AM - 18 Sep 2015

Raymond Chandler
@Raymond42c
Uber = more trustworthy, because of the transparency of price, driver, and most importantly route. We must not stop innovation @Weatherbird
11:11 AM - 18 Sep 2015