The spy agency with a name almost too long to tweet unofficially announced its relocation decision Thursday. The National Geospatial-Intelligence Agency's current headquarters are in St. Louis, and will remain in the city.
Many area residents celebrated the decision.

Kevin Gunn
@kevindgunn
I was a supporter of the downtown stadium, but all in all, NGA's economic impact will dwarf the impact a stadium would have.
4:50 PM - 31 Mar 2016

Kevin Gunn
@kevindgunn
Hard to overstate how big a deal in keeping the NGA. Has the potential to be a game changer for the City.
4:36 PM - 31 Mar 2016

Missy Kelley
@KelleyStl68
Congratulations and THANK YOU to @MayorSlay for huge win on NGA. It was a tireless effort & a win for the entire region. #STLRising
4:34 PM - 31 Mar 2016
Kelley is the president and CEO for Downtown STL Inc. 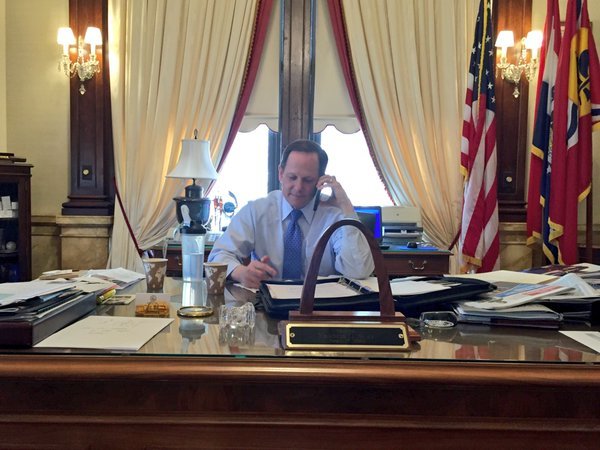 Jarce Corlton
@JaceCarlton
That NGA decision has been keeping me up at night, shout out to Mayor Francis Slay and all of Missouri
4:49 PM - 31 Mar 2016

Jennifer M. Joyce
@JenniferJoyceCA
We needed some good news in this town. Excellent! #NGASTL
5:11 PM - 31 Mar 2016
There were also questions about the process.

Emerald Morrow
@emeraldmorrow
But, still many questions about gentrification, & how #NGA relocation will change community, which is low-income & predominantly Black #Stl
4:45 PM - 31 Mar 2016

A²
@andrewarkills
Glad NGA stays in STL. Pissed that poor minorities are once again being pushed aside to make it happen. Eminent domain isn't fun kids.
4:52 PM - 31 Mar 2016

Alex P
@aprice1828
@nextSTL A good design is the difference between helping the north side and hurting it. We can only hope for creativity and ingenuity.
5:04 PM - 31 Mar 2016

Scott Tyler
@Profireman
#nga Decides on new complex in N. St. Louis. More proof that the government is cluless
5:05 PM - 31 Mar 2016
Tyler, according to his Twitter biography, is an alderman in Belleville.

Steven F Smith
@theroyale
So what are the plans for the current NGA on Arsenal at the river? There has been a federal facility there since Missouri was a state.
5:16 PM - 31 Mar 2016