With the losses mounting in the NHL's dreadful Eastern Conference this season, heads must roll.Flyers coach Peter Laviolette was the first to go this season. Hapless Panthers coach Kevin Dineen was next, with general manager Dale Tallon scrambling to keep his own gig. Now the Sabres have hit the reset button by hiring St. Louis native Pat LaFontaine as the new president of hockey operations. Gone are coach Ron Rolston and general manager Darcy Regier, whose excellent Matt Moulson deal was not enough to save this job.Regier went on a spending spree when new owner Terry Pegula bought the team. The Sabres went bad last season and got worse in this campaign.So now LaFontaine is in charge and Ted Nolan -- remember him? -- will move in behind the bench as the interim coach. Both are Buffalo fan favorites from back in the day, when LaFontaine was an explosive scorer and Nolan was a fiery leader.LaFontaine is looking for a GM to manage the daily hockey operations while he learns the ropes and manages the big picture.Here is how the Twitterverse reacted to these sweeping developments: 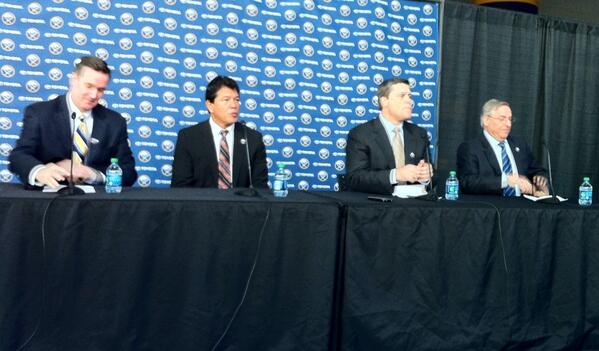 Pierre LeBrun
@Real_ESPNLeBrun
Terry Pegula was sold on a rebuilding year but I think the level of bitterness and outright anger from fans no longer could be ignored...
Nov. 13, 2013

Pierre LeBrun
@Real_ESPNLeBrun
One of Regier's worst decisions was keeping Rolston as his head coach. Few people around the league believe he was head coach material
Nov. 13, 2013

Craig Custance
@CraigCustance
Pegula on firing Regier: "I have a lot of respect for Darcy Regier. I even have more respect for him after I talked to him last night."
Nov. 13, 2013

Dan Rosen
@drosennhl
Lafontaine is a great guy, was a great player, someone you want around. But it must be noted that he has almost no front-office experience.
Nov. 13, 2013

Ray Ferraro
@rayferrarotsn
A key for Lafontaine will be to surround himself w great people -- much like Bergevin did in Montreal w Dudley and Carriere #sabres #Habs
Nov. 13, 2013

Nick Cotsonika
@cotsonika
Really like what Lafontaine is saying. Sabres have to be patient and smart. He knows what he has to do. Now he needs to execute.
Nov. 13, 2013

Bob McKenzie
@TSNBobMcKenzie
In short term, LaFontaine will work with BUF asst GM Kevin Devine but has short list of GM candidates and the search for fulltime GM is on.
Nov. 13, 2013

Craig Custance
@CraigCustance
LaFontaine on declining GM opportunity: "I don't have the experience right now... I know the people out there who know how to do the job."
Nov. 13, 2013

Nick Cotsonika
@cotsonika
Lafointaine said Nolan comes in as a "very qualified man" and will "finish out the year for us." Nolan is an interim coach.
Nov. 13, 2013

Nick Cotsonika
@cotsonika
Nolan says he's going to go in with "guns a blazin'" and will try to change the culture.
Nov. 13, 2013

Chris Botta
@ChrisBottaNHL
Ted Nolan will coach that team right out of a top-3 pick.
Nov. 13, 2013

Nick Cotsonika
@cotsonika
Sabres have so much to offer. Passionate fans, rich owner, great facilities, lots of picks. They have a chance to do it right and win.
Nov. 13, 2013