Well, it looks like the New York Yankees will definitely need a new third baseman next season. It appears David Freese has a better chance of manning the hot corner in the Bronx than Alex Rodriguez.You will recall that A-Rod appealed his 211-game ban for allegedly abusing performance enhancing drugs.  Rather than accepting his punishment as other PED scofflaws have, he filed a grievance against Major League Baseball.He got his day in court, but it did not last long. His attorney demanded the opportunity to cross-examine commissioner Bud Selig as part of this process. Arbitrator Fredric Horowitz didn't see see the relevance of that to this hearing. He won't compel Selig to take the stand. So A-Rod and his attorney stormed out of the proceedings in New York and vowed never to return. Their position: If Selig won't testify, Rodriguez won't testify. The next stop for the Rodriguez legal team figures to be federal court. In the meantime, Rodriguez is waging a public relations war against Selig and MLB. He vented his spleen on WFAN 660 after his walkout, denying the PED allegations and returning fire on Selig.Here were a few highlights:"He hates my guts. It's 100 percent personal. This is all about his legacy. To put me on his mantle would be a big trophy for him."And . . . "This thing should have ended with Selig on Thursday and me [testifying] on Friday. But he did not have the courage to look me in the eye."And . . ."All I want to do is play baseball. This has been a disgusting process for everyone. I'm embarrassed to be involved in it."Rodriguez is used to getting his way. He signed the most ridiculous contract in baseball history, a deal that nearly sunk the Texas Rangers franchise. He walked out of the remainder of that deal with the Yankees, then got an equally ridiculous offer to come back.Oh, he has had Cameron Diaz feed him popcorn. 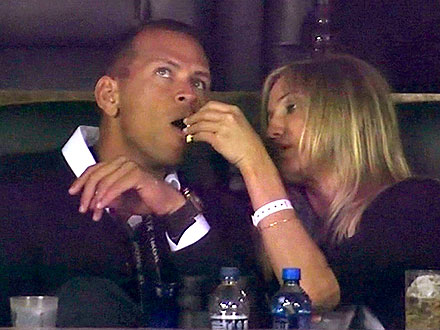 A-Rod's world.
So when this is the world you live in, how are you going to let a paper pusher like Selig tell you how to live your life?We can't wait for A-Rod to arrive at spring training to reclaim his third base job, like an exiled king returning from the hinterlands to claim his throne.Let's all give a nod to A-Rod's for entertaining us with his celebrity outrage. He is offering a nice change of pace to the feeble Ryan Braun mea culpa and the tedious Barry Bonds standoff.But is hard to imagine a scenario that ends well for him. Our guess: He collects a bunch of money at some point and just goes away.Here is how some other folks responded in the Twitterverse, with a few movie clips suggested by the masses:

Andrew Marchand
@AndrewMarchand
A-Rod, with his love of baseball and his issues, guilty or innocent, sounds more and more like Pete Rose by the moment
Nov. 20, 2013

Eric Stangel
@EricStangel
Leave A-Rod alone. Besides the mountain of evidence, there is absolutely no proof the guy did a thing wrong. #FreeARod
Nov. 21, 2013

Jeff Passan
@JeffPassan
Alex Rodriguez: "This is my whole life. My legacy. I'm part of history." Next to "megalomania" in the dictionary should be A-Rod's picture.
Nov. 20, 2013

Mike Oz
@mikeoz
A-Rod vs. Selig. "It's about his legacy and it's about my legacy." yhoo.it/17r5Lvo pic.twitter.com/mpGr6pN6Av 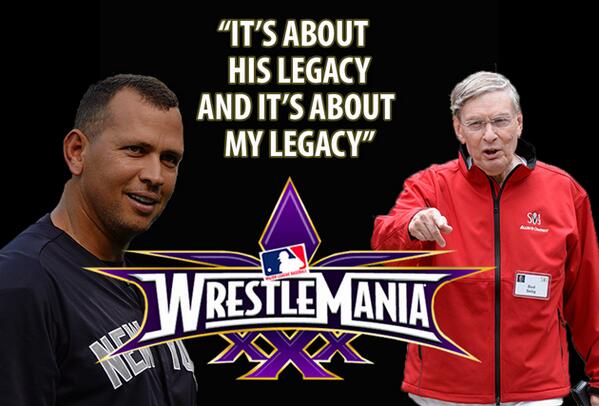 Jon Morosi
@jonmorosi
More Scott Boras on latest A-Rod news: "When you can't face your accuser, what's on trial now is the process itself." @FOXSports1
Nov. 20, 2013
The Otter Defense
by Ed Morrissey via YouTube

Jeff Passan
@JeffPassan
You could substitute Alex Rodriguez's name for Lance Armstrong and pretty much everything would be the same.
Nov. 20, 2013

The Fake ESPN
@TheFakeESPN
A-Rod storms out of steroid hearing today by picking up judges bench, throwing it through courtroom wall, then walking out resulting hole.
Nov. 20, 2013
YouTube AL PACINO SPEECH JUSTICE FOR ALL
by Carlos Salazar via YouTube

Jerry Crasnick
@jcrasnick
I think it might be time for A-Rod and Rob Ford to get their own reality show.
Nov. 20, 2013

Jonah Keri
@jonahkeri
Kids, you won't remember this, but Alex Rodriguez was once a spectacularly likable shortstop for the Seattle Mariners.
Nov. 20, 2013