Former Missouri defensive end Michael Sam hopes to become the first openly gay man to play in the NFL. The SEC's Defensive Player of the Year shared those dreams with ESPN and the New York Times in interviews Sunday."I understand how big this is," he told ESPN in an interview for its "Outside the Lines" show. "It's a big deal. No one has done this before. And it's kind of a nervous process, but I know what I want to be . . . I want to be a football player in the NFL."Sam said this news would come as no surprise to his coaches and teammates at Mizzou.They had that discussion in August."Coaches just wanted to know a little about ourselves, our majors, where we're from, and something that no one knows about you," Sam told ESPN. "And I used that opportunity just to tell them that I was gay. And their reaction was like, 'Michael Sam finally told us.' "Sam opted to speak to media outlets after his experiences at the Senior Bowl, where he sensed his sexual orientation wasn't much of a secret within NFL circles."I didn't realize how many people actually knew, and I was afraid that someone would tell or leak something out about me," he said. "I want to own my truth. ... No one else should tell my story but me."Here is how the Twitterverse responded:

Kentrell Brothers✈✈
@Kentrell_Mizzou
It takes a lot of courage to do what he did. And we are behind him all the way.
Feb. 9, 2014

Trey Hobson™
@TreyHob21
Shout out to my former Teammate Michael Sam. Though its old news to us its a Great move by a great guy. Wish u much success in the future!
Feb. 9, 2014

Chase Daniel
@ChaseDaniel
Had multiple convos with @MikeSamFootball this year, amazed at his honesty & courage! Once a tiger, ALWAYS a Tiger!
Feb. 9, 2014

Jack Meiners
@jackmeiners75
I'm sure it took a lot of courage to make something so personal, public. Proud of my brother and 1 on 1 pass rush adversary, Michael Sam
Feb. 9, 2014

Dave Matter
@Dave_Matter
Pinkel: "We’re really happy for Michael that he’s made the decision to announce this, and we’re proud of him and how he represents Mizzou"
Feb. 9, 2014

Gabe DeArmond
@GabeDeArmond
#Mizzou LB Donovan Bonner MT @ElTorroOcho : We knew for 5 years and no one said anything says a lot about our family atmosphere
Feb. 9, 2014

Pat Forde
@YahooForde
Proud of the alma mater football program for support of and respect for Michael Sam. Good for Mizzou.
Feb. 9, 2014

Paul Finebaum
@finebaum
The exemplary manner in which Gary Pinkel and the Mizzou family handled this should be a template for every program in America.
Feb. 9, 2014

Mark Kriegel
@MarkKriegel
Michael Sam. Courageous to do this BEFORE the combine.
Feb. 9, 2014

Adam Schefter
@AdamSchefter
Michael Sam is the model voice to speak out on this issue. As one NFL exec said today, "This young man is courageous."
Feb. 9, 2014

Jesse Spector
@jessespector
Coming out before the draft is such a smart move. It ensures that the team that picks Michael Sam will be one that supports him fully.
Feb. 9, 2014

DeAngelo Williams
@DeAngeloRB
I could care less about a man's sexual preference! i care about winning games and being respectful in the locker room!
Feb. 9, 2014

steve gleason
@TeamGleason
It appears that @Mikesamfootball is a very high character guy. Beyond athletics, this is what u need in the locker room, & on the field. -SG
Feb. 9, 2014 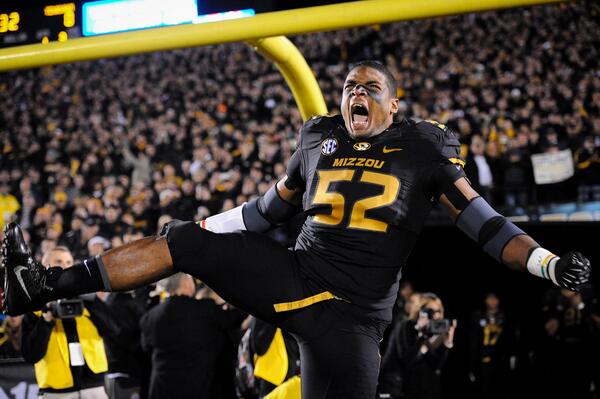 Michael Sam
@MikeSamFootball
I want to thank everybody for their support and encouragement,especially @espn , @nytimes and @nfl . I am proud to tell my story to the world!
Feb. 9, 2014

trey wingo
@wingoz
The story now isn't Sams decision nor NFL statement applauding it. Its how 32 teams choose to deal with it. World is watching gentlemen
Feb. 9, 2014