So Kim Anderson is the new basketball coach at the University of Missouri. Mizzou sports fans have never seen anything like this. Athletic director Mike Alden enforced an unprecedented code of silence while traveling just down the road to hire Anderson from Central Missouri.The Board of Curators approved the contract for the school's new basketball coach this afternoon. Peoria Journal Star columnist Kirk Wessler, who covered Anderson back in the day for the Columbia Tribune, first reported the hiring via Twitter. (Wessler also has very good sources in the Missouri Valley Conference)Soon thereafter Post-Dispatch reporter Dave Matter offered the same news. And then came the announcement of a 10 a.m. Tuesday news conference to welcome Anderson.The hiring shocked nobody. After all, Anderson is a True Son of Mizzou. He played for legendary MU coach Norm Stewart. He worked under him as an assistant coach.

He stayed loyal to his Missouri roots and built a Division II powerhouse at Central Missouri. He just won a national title -- a timely achievement, given coach Frank Haith's decision flee for more secure work at Tulsa.

Anderson is not going to come completely undone on this job, as Quin Snyder did. He is not going to leave Mizzou to "return home" -- as Mike Anderson did while leaving for Arkansas -- because he already is home.

He isn't going to exit abruptly for more money and more security because this should be Kim Anderson's last coaching job.

Many boosters are rallying behind him. They harbor a romantic vision returning the program to the good old Norm Stewart days. The Tigers will close the borders and rebuild with "Missouri Made" players. They wear down foes with raw-boned country boys, defending and rebounding with zeal.

But the reality is less rosy. Anderson faces a mammoth challenge recruiting and coaching against the likes of John Calipari, Billy Donovan, Bruce Pearl and Frank Martin.

This is not about history and geography. It is about fighting for talent and clawing out victories in a basketball conference that will become a lot deeper in the next few years and new revenues flow into the SEC.

Stewart had to take his recruiting to the national level. Snyder did the same. Anderson relied heavily on friends and relatives, the Haith expanded the talent search back to both coasts.

Mizzou only closed the borders briefly under Stewart, when Stormin' Norman beat the likes of Dean Smith and Eddie Sutton to land Steve Stipanovich and Jon Sundvold in his greatest one-two recruiting coup.

After those two players had a glorious run, MU hit a rut from 1983-85. The Tigers missed the NCAA Tournament in consecutive seasons, forcing Stewart to take his recruiting in a different direction.

With recruiting specialist Rich Daly running point, Mizzou started using all means necessary to land players, particularly out of the Motor City. Young men who couldn't locate Missouri on a map kept showing up to help the Tigers win.

His resourcefulness was legend. Perhaps Daly's career highlight was coming up with JUCO gunner Paul O'Liney out of thin air, right in the middle of a season. Stewart cried out for guard help after absorbing a 120-68 loss at Arkansas.

"You want a toe? I can get you a toe, believe me. There are ways, Dude. You don't wanna know about it, believe me."

This approach caused a stir in college basketball community, but NCAA crime-stoppers were only able to prove various nickel-and-dime violations against Missouri.

Building and maintaining a steady pipeline of talent is a dicey proposition. If anything, that process has become even more treacherous the past few years.

The elite high school recruits just pass through the college ranks on the way the NBA, offering modest return on the enormous effort required to land them.

Then there is the transfer phenomenon. In the old days, only guys buried deep on the bench bolted to other schools.

Now players are jumping from school to school willy-nilly, seeking better arrangements even if after getting lots of playing time.

Roster stability is a noble concept, but it has become increasingly rare. Teams still have four-year players, but the impact players tend to come and go with the wind.

Anderson had about an hour to enjoy his homecoming. Then he had to get right to work to prove that Mizzou didn't have to hire a bigger name coach (like Gregg Marshall or Ben Howland) to remain relevant on a national level.

His first job is re-recruiting Jakeenan Gant and Namon Wright, elite high school prospects who signed up while Haith was still around. These two ranked as the top SEC signings behind the Kentucky and Florida recruits.

If Gant and Wright still decide to come to Mizzou, the Tigers will start their next era with a competitive team. Along with transfers Cameron Biedscheid and Deuce Bello, the would add high-end talent to the returning nucleus of Johnathan Williams III, Wes Clark, Ryan Rosburg, Torren Jones and Keanu Post.

But if Gant and Wright ask out of their letter of intents, the Tigers would be in a world of hurt.

If MU fans bailed on a program that won 76 times in three years, how would they respond if the Tigers fell toward the bottom of the SEC pack?

Here is how the Twitterverse reacted:

Joe Walljasper
@JoeWalljasper
I like the Kim Anderson hire for Mizzou. Good coach, good person, will coach a disciplined team & won't always be looking for the next job.
Apr. 28, 2014

Evan Daniels
@EvanDaniels
First order of business for Kim Anderson is to keep Tim Fuller on board. Elite recruiter.
Apr. 28, 2014

Matt Zemek
@MattZemek
Tennessee is unquestionably a football school. Missouri's identity is not as clear-cut. Is this really the best Mizzou could do?
Apr. 28, 2014

Vahe Gregorian
@vgregorian
Stewart says timing is excellent, praises MU administration, expects will do great job. Then laughs and says ... "and then you go to work."
Apr. 28, 2014

Gary Parrish
@GaryParrishCBS
It should be noted that Mizzou hired a coach that it could've hired 11 days ago AFTER a recruiting weekend that could've been beneficial.
Apr. 28, 2014

Jason King
@JasonKingBR
Keep in mind, Marshall makes about 1.9 mil per yr, has an 11th grade son and a top 10 team coming back. This says more about wsu than mizzou
Apr. 28, 2014

Dave Matter
@Dave_Matter
Not sure how much it affected search but Missouri definitely wanted to explore what led to 2012 SI piece on UCLA when it came to Howland
Apr. 28, 2014

Kim English
@Englishscope24
Couldn't be happier with the hiring of the new Head Coach of @MizzouHoops ! #ForMizzou
Apr. 28, 2014

Laurence Bowers
@LBowers_21
Thrilled to have Coach Kim Anderson at Mizzou. Going back to the arena will still feel like home now.WELCOME!!! Can't wait to watch #MIZ
Apr. 28, 2014 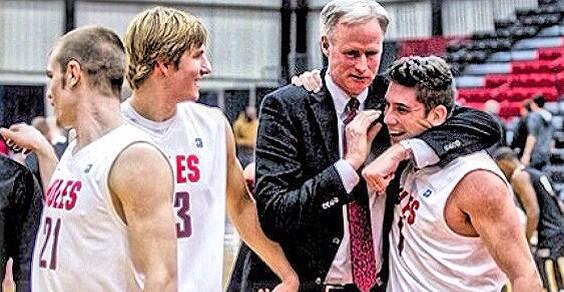 Dave Matter
@Dave_Matter
Anderson will be the oldest men's basketball coach in the SEC by nearly 4 years. He turns 59 in May; Calipari turned 55 in February.
Apr. 28, 2014

Pat Forde
@YahooForde
I'm sure Missouri is right proud of its cloak-and-dagger coaching search, but it seems time for Mike Alden to update fans on the process.
Apr. 28, 2014

Steve Moore
@KMOXPD
Confused. Why the search firm expense to hire Kim Anderson. What did you get for the $42K? #Mizzou
Apr. 28, 2014

Dan Lucero
@danluceroshow
Kim Anderson never gets that gig if he weren't a Mizzou alum. And he never gets a SNIFF from any other D-I job, ever. This is hysterical.
Apr. 28, 2014

Dan Lucero
@danluceroshow
Mizzou took damn near two weeks and blew money on a search firm to hire an alum, coaching in-state, who'd have jumped at the job. COMEDY
Apr. 28, 2014

Mick Shaffer
@mickshaffer
I thought Kim Anderson had been passed over too many times to ever get the MU job. This only gives Ralph Nader more hope.
Apr. 28, 2014