New Missouri basketball coach Kim Anderson gave a winning performance during his introductory news conference.This came as no surprise to anybody who followed Anderson through his playing days into his coaching and administrative career. He may not be the hot coaching commodity that Gregg Marshall is these days, but he is a much bigger personality.So far, so good for his regime. He hasn't nailed down his coaching staff yet or wooed the previously signed recruits, so we're a long way from knowing whether he will start his tenure with a competitive team.\He vowed to build around high school recruits  fans will get to know for four years, but  he built his title team at Central Missouri almost entirely with transfers passing through.It will be interesting to see if he can make this massive transition. For his sake, let's hope he can carry the momentum from this morning through the critical days ahead as he begins reorganizing the operation to his liking.Here were some highlights of his news conference:

Steve Walentik
@Steve_Walentik
Anderson: "We're here to win rings, earn diplomas and make a big impact on those around us. This is bigger than basketball."
Apr. 29, 2014

Gabe DeArmond
@GabeDeArmond
Anderson says recruiting is more intense than it was during his last tenure at #Mizzou
Apr. 29, 2014

Gabe DeArmond
@GabeDeArmond
Anderson said he wants to build over time "don't want to take a bunch if guys just so we can get through a year"
Apr. 29, 2014

Ashley Zavala
@ZavalaA
New Mizzou bball coach Kim Anderson: "I don't like to use the term 'rebuilding', I like to think of it as 'reloading'."
Apr. 29, 2014

Gabe DeArmond
@GabeDeArmond
Anderson says he is a flexible coach but not on defense. "I want to make sure that guys will buy into what we want to do"
Apr. 29, 2014

Steve Walentik
@Steve_Walentik
Anderson on some of skepticism about his hire: "Apparently, I'm old. I just learned that yesterday and it was devastating."
Apr. 29, 2014

Ashley Zavala
@ZavalaA
Mizzou coach Kim Anderson: "those of you who have tickets for the yellow seats (lower level), please, for God sakes, come to the games."
Apr. 29, 2014

Dave Matter
@Dave_Matter
Anderson incredibly candid: "This will be an applauded hire and there will be skeptics."
Apr. 29, 2014 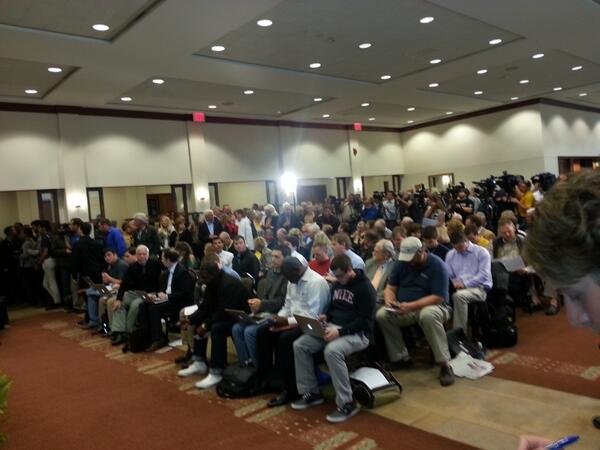 Steve Walentik
@Steve_Walentik
Anderson: "I don't necessarily think there was a divide (between old and new), but if there was one, there isn't anymore."
Apr. 29, 2014

Dave Matter
@Dave_Matter
Anderson: "There have been some pretty damn good coaches that came through here." Says he wants to help Missouri establish an identity
Apr. 29, 2014

Gabe DeArmond
@GabeDeArmond
Anderson: "UCM is a better job than a lot of Division One programs in the country. I had chances to look elsewhere."
Apr. 29, 2014

Steve Walentik
@Steve_Walentik
Anderson sold recruits on going Division II instead of low-level DI by telling them they could win a championship.
Apr. 29, 2014

Dave Matter
@Dave_Matter
I touched base with former Mizzou great Anthony Peeler. He really wants to join Anderson's staff but says "that's up to Coach."
Apr. 29, 2014

Vahe Gregorian
@vgregorian
Anderson on process: "I'm going to write a book on this week, and I hope you guys will buy it."
Apr. 29, 2014

Dave Matter
@Dave_Matter
Gary Link told me he broke down in tears when Anderson accepted the job and again this morning when he picked up Kim to bring to press conf
Apr. 29, 2014

Joe Walljasper
@JoeWalljasper
To clarify earlier tweet, Alden said Anderson package would be $2M a year with incentives. The guaranteed salary is $1.1 M before incentives
Apr. 29, 2014 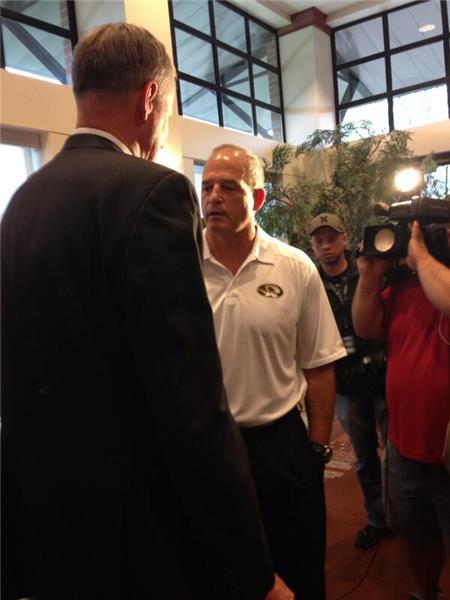 Gabe DeArmond
@GabeDeArmond
Anderson "I just want to bring some consistency and stability from the fact that I'm not going anywhere. I'm here."
Apr. 29, 2014