About 10:30 a.m., Build-A-Bear Workshop posted this photo and message to Twitter: 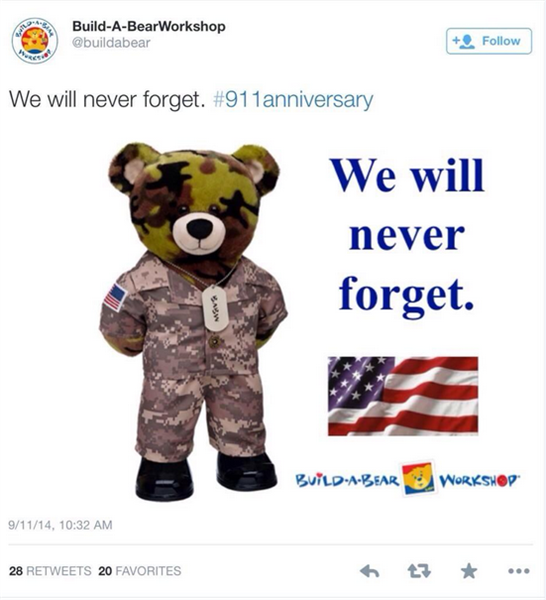 Chris Turner
@theturner
Re LRT, it would appear the @buildabear social media guru realized a stuffed bear in camo and dog tags was a bit crass. It's been deleted
Sep. 11, 2014
On Facebook, meanwhile, the post remains up (at 2 p.m.) with several comments, more than 2,000 likes and more than 200 shares. One comment, from Michelle McMullin, says: "Love the respect shown here. Great job! #neverforget" Another, from Melissa Reading, says: "Delete my comment, fine, doesn't make it any less disgusting, just makes you look even worse than you already do.." (The comment didn't appear on the post at 2 p.m.)
The reaction on Twitter included many more negative messages:

luftballoons
@luftballoons
with each 9/11 anniversary comes the most awkward and inappropriate tweets from companies nationwide. too bad @buildabear deleted theirs...
Sep. 11, 2014

FuzzBeed Eli
@EliGieryna
.@buildabear with a strong early lead in the worst brand# tweet today, but there's plenty of time for other brands to catch up.
Sep. 11, 2014

Scott Kessler
@scottkess
Hey @buildabear - I wasn't offended. Quite the opposite. I applaud the patriotism/salute to service men/women.
Sep. 11, 2014

Snoflake❄️
@Snoflake1031
@moxiemom I don't get it either. People just need something to complain about today. I was touched by their tweet @buildabear
Sep. 11, 2014

Snoflake❄️
@Snoflake1031
Thank you @buildabear for your patriotic post today! It was very kind of you to honor those lives we lost today 13yrs ago. I support you!
Sep. 11, 2014

Kylee
@bloggingky
@buildabear There was NOTHING wrong with your #Remember911 tweet!
Sep. 11, 2014

Miles Kahn
@mileskahn
Hey @buildabear, do you guys have a workshop for building tone-deafness? http://t.co/RY3xn662Le 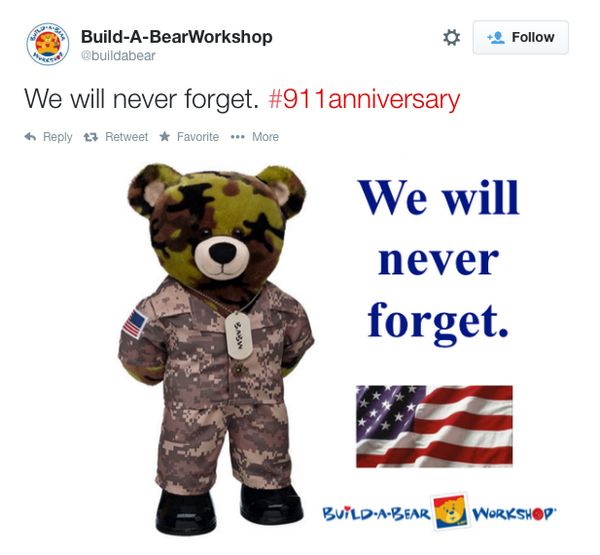 dan sinker
@dansinker
I'd like off this planet please. RT @buildabear: We will never forget. #911anniversary http://t.co/9dTdyiFF7i
Retweeted by jeffrivers
Sep. 11, 2014

Dan Meservy
@danielmeservy
@buildabear I'm one voice, but FWIW, I see absolutely nothing wrong with your post memorializing 9/11
Sep. 11, 2014
A representative of the company, contacted about the post, had not responded.