Stephen Conway
@AldConway
@hmoore013 Heidi the police have the matter under control. Yes there is a serious injury. I left so the police can process..
Oct. 8, 2014

Stephen Conway
@AldConway
I have returned. Peaceful but encountered many people coming that do not live in Shaw.
Oct. 8, 2014

Stephen Conway
@AldConway
Protesters beating on police car in front of me
Oct. 8, 2014
Antonio French is alderman for the 21st Ward, in north city.

Antonio French
@AntonioFrench
At the scene of yet another young man's death. This happens too often in our city. It's a crisis that we should all be concerned about. #STL
Oct. 8, 2014

Antonio French
@AntonioFrench
The victim's mother was here. She fainted. An ambulance came to attend to her. There is nothing like a mother's pain at the loss of a child.
Oct. 8, 2014

Antonio French
@AntonioFrench
The chief wanted to address the crowd. Way too volatile for that. Good decision to leave. Could've been a repeat of Chief Jackson's fiasco.
Oct. 8, 2014

Antonio French
@AntonioFrench
In case we needed another reminder, this is not about the City of Ferguson. This is about all of St. Louis -- and beyond.
Oct. 8, 2014 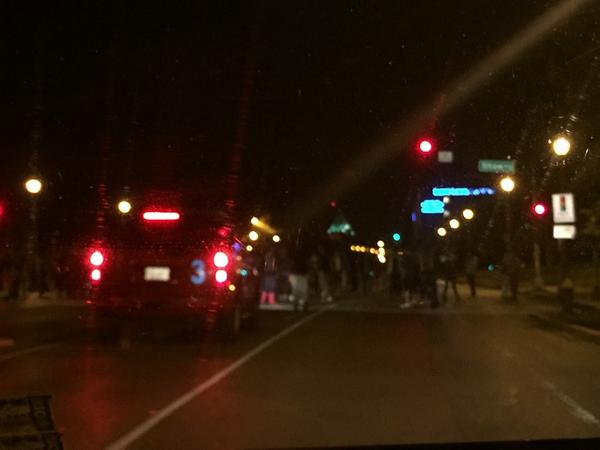 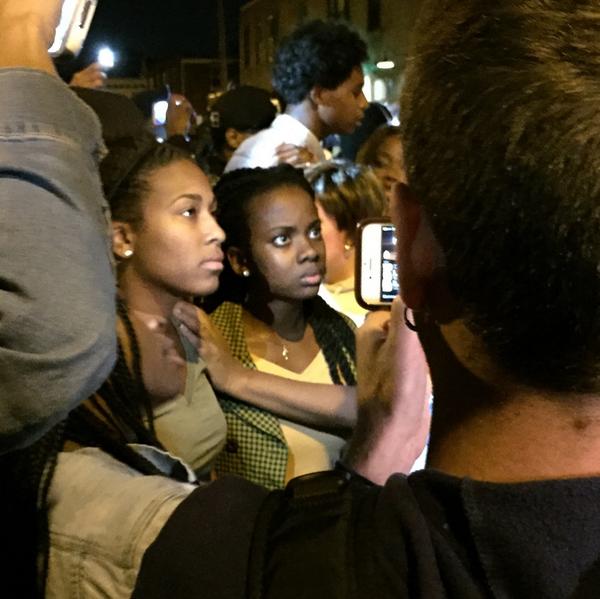 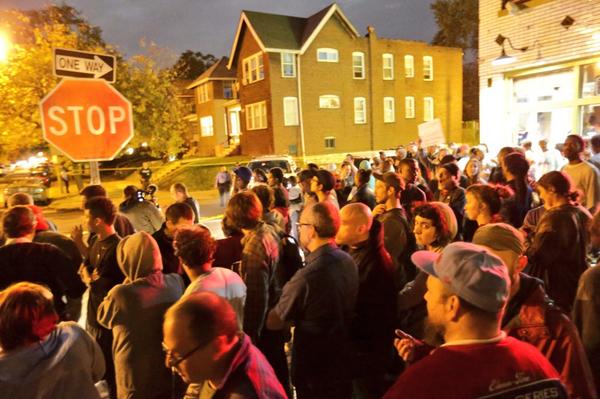 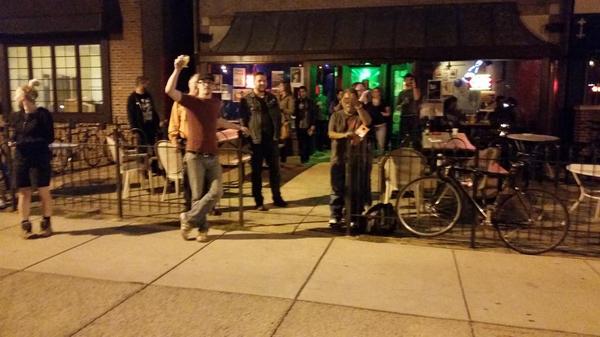 Antonio French
@AntonioFrench
Protestors have reached the intersection of Grand and Gravois. http://t.co/DqBG5bq5JD 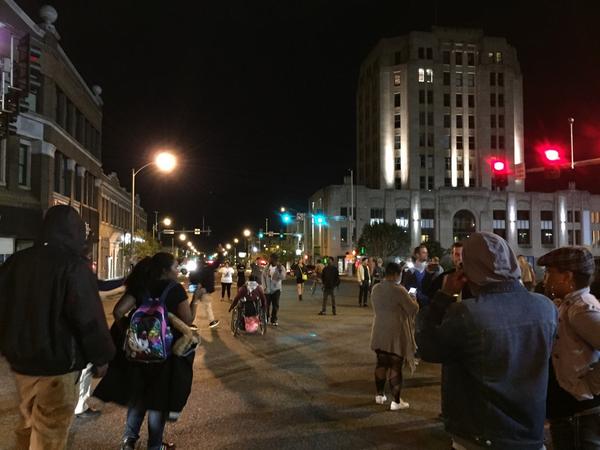 Antonio French
@AntonioFrench
Last night again highlighted the broken trust between community and police in St. Louis. This is a dangerous situation for our city.
Oct. 9, 2014

Antonio French
@AntonioFrench
Working to restore that trust is essential for the future of our city. Independent investigations of police shootings will help do that.
Oct. 9, 2014

Antonio French
@AntonioFrench
Our bill to create an Office of Civilian Oversight will be introduced soon. And true oversight by the Public Safety Cmte will also help.
Oct. 9, 2014

Antonio French
@AntonioFrench
But the fact is, police policing police is not something that our constituents trust. Independent oversight is needed to restore trust.
Oct. 9, 2014

Antonio French
@AntonioFrench
And the DOJ @CivilRights needs to understand that this is not just about the City of Ferguson. That's not how St. Louis works.
Oct. 9, 2014

Antonio French
@AntonioFrench
Even last night, I heard complaints about people coming in another ward or nabe. The territoriality is ridiculous. We are all St. Louisans.
Oct. 9, 2014
St. Louis City's Mayor Francis Slay was out of town yesterday, at the U.S. Conference of Mayors.

MayorSlay.com
@MayorSlay
I am at the Clinton Library today for a discussion with other US mayors about community policing and #Ferguson. #fgs
Oct. 8, 2014 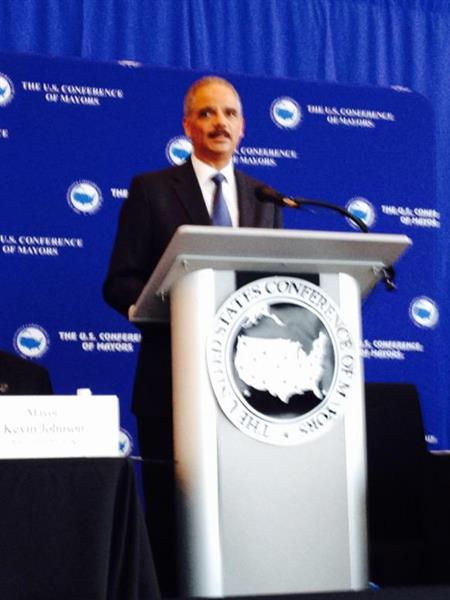 MayorSlay.com
@MayorSlay
At a US Conference of Mayors meeting at the Clinton Library to discuss #Ferguson. http://t.co/GD7i4xSczk 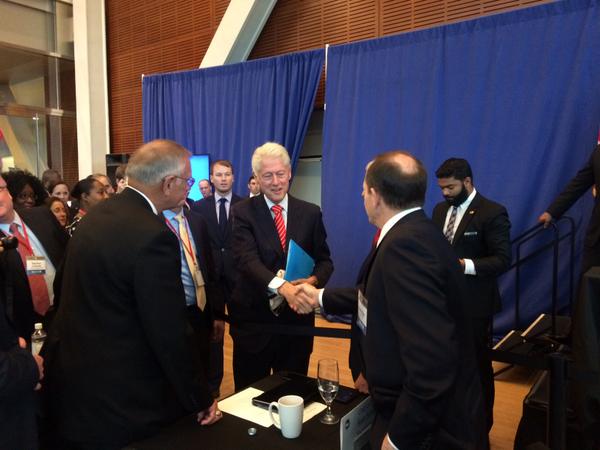 MayorSlay.com
@MayorSlay
"We cannot afford not to listen to and know our neighbors." -Former Pres Bill Clinton. #fgs http://t.co/uKW5usastK 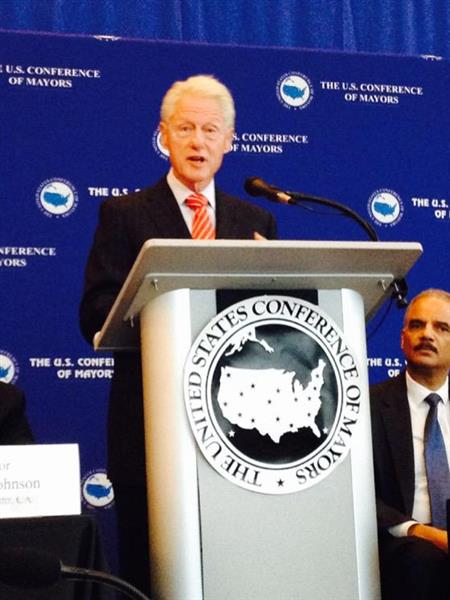 MayorSlay.com
@MayorSlay
The special election in the 15TH WARD drew almost 20% of eligible voters. I called that a strong turnout, but that's a relative thing. #fgs
Oct. 8, 2014

MayorSlay.com
@MayorSlay
Common ground: there are far TOO MANY guns in US cities. #fgs
Oct. 9, 2014

Yesterday afternoon, St. Louis Police Chief Sam Dotson and I were in Little Rock meeting with mayors about policing. While we were driving home, a tragic shooting happened in the Shaw neighborhood. We put to use the ideas we had discussed earlier in Arkansas. A crowd, including some people who had been demonstrating earlier in the evening in Ferguson, gathered. Chief Dotson and his department responded with restraint, professionalism – and transparency. Officers addressed the crowd directly with all the information that was available. The department used its social media accounts to pass along what it knew. The department was supported at the scene by community and neighborhood members with whom it had built relationships in the past. There were no arrests. Then today, Circuit Attorney Jennifer Joyce and I discussed how we could add new independence and transparency to the investigation itself. Whatever the outcome, it is vitally important that everyone in our City and beyond has confidence in the investigation and the results. So, after discussing how we could accomplish that, Jennifer has decided to partner with the U.S. Attorney’s Office to investigate this matter. They have agreed. Consistent with the current protocol, the police department's Force Investigative Unit will conduct an investigation. It will then deliver the results to the Circuit Attorney to consider criminal charges. At the same time, the evidence will also be turned over to a federal prosecutor to review for federal civil rights violations. That represents a second, independent investigation of the facts. Just as importantly, if no charges are filed, the circuit attorney will release all of the investigative evidence and information so everyone knows exactly what happened. I thank Jennifer Joyce and U.S. Attorney Richard Callahan for doing this. I believe it will add an extra layer of independence to a policy that is already open and transparent.

Eddie Roth tweeted information about the neighborhood, and an officer acting as a spokesman.

Eddie Roth
@eddieroth
I know the news media can be counted on to report about the community in which tonights events occurred -- the Shaw neighborhood.
Oct. 8, 2014

Eddie Roth
@eddieroth
@eddieroth The Shaw Neighborhood, because of its diversity, long has attracted people and families with a deep commitment to social justice.
Oct. 8, 2014

Eddie Roth
@eddieroth
@eddieroth The Shaw Neighborhood long has been a neighborhood that welcomes all, that invites all to become involved in community life.
Oct. 8, 2014

Eddie Roth
@eddieroth
@eddieroth The sole qualification for admission to the Shaw Neighborhood is respect -- for yourself and for your neighbors.
Oct. 8, 2014

Sarah Kendzior
@sarahkendzior
Tomorrow is the two-month anniversary of the death of Michael Brown. Tonight another black teenager has died at the hands of police #stl
Oct. 8, 2014

Eddie Roth
@eddieroth
@sarahkendzior Yes, in a neighborhood that has had a deep commitment to diversity and equity and good works and justice for decades.
Oct. 8, 2014

Eddie Roth
@eddieroth
@sarahkendzior That the loss occurred in a righteous community that long and actively has worked together for justice.
Oct. 8, 2014

Sarah Kendzior
@sarahkendzior
@eddieroth It's not going to make a bit of difference to a grieving mother that her son was killed by police in a nice neighborhood
Oct. 8, 2014

Sarah Kendzior
@sarahkendzior
@eddieroth What the neighborhood is like is irrelevant. A life is a life. A life was taken -- by police, again.
Oct. 8, 2014

Eddie Roth
@eddieroth
@sarahkendzior What the neighborhood is like should be of interest to a journalist.
Oct. 8, 2014

Eddie Roth
@eddieroth
@sarahkendzior Maybe I am mistaken, but what you found Ferguson to be like seems to have figured into your coverage there.
Oct. 8, 2014

Sarah Kendzior
@sarahkendzior
@eddieroth That another young black man was killed by police should be of interest to a St. Louis City Hall worker
Oct. 8, 2014

Sarah Kendzior
@sarahkendzior
@eddieroth There is zero polemic in a tweet acknowledging a man's death. I'm happy to discuss neighborhood revitalization but not now.
Oct. 8, 2014
The official Twitter account for the city's police department tweeted these statements about the shooting last night:

St. Louis, MO Police
@SLMPD
The officer was not injured. A gun was recovered from the scene. The investigation is ongoing.
Oct. 8, 2014

St. Louis, MO Police
@SLMPD
.@ChiefSLMPD's media briefing relative to 10/8 officer-involved shooting is now posted on our YouTube channel: http://t.co/YIJrTQoO0p
Oct. 9, 2014
In response to a Post-Dispatch photographer who tweeted at 10:30 p.m. about a crowd of about 100 people gathering near the scene of the shooting, a city official said:

Jeff Rainford
@jeffrainford
@PDPJ @ChiefSLMPD is going to give them an updated report.
Oct. 8, 2014
In response to a retweet that added the information that Rainford is the mayor's chief of staff, he said:

Jeff Rainford
@jeffrainford
I have learned from 14 years on this job that facts and context matter to the people who live in the City if STL. (1/2)
Oct. 9, 2014

Jeff Rainford
@jeffrainford
I trust the people of our City to do what's best when they have the information. In this case, our job is to give them the information.
Oct. 9, 2014
Maria Chappelle Nadal retweeted many protesters who went to the Shaw neighborhood from Ferguson on Wednesday night. One exchange: 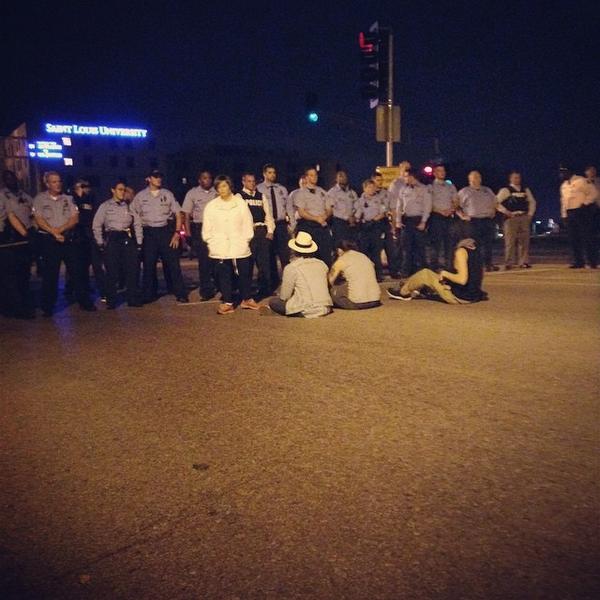 MariaChappelleNadal
@MariaChappelleN
@Nettaaaaaaaa Remember we have to grow our alliance across our differences. We need him, but he needs a helping hand on how to act. Be that
Oct. 9, 2014

MariaChappelleNadal
@MariaChappelleN
#Ferguson youth show much love in South City shooting. It's all about solidarity!
Oct. 9, 2014

MariaChappelleNadal
@MariaChappelleN
All the people who have been asleep for the last two months, here's to a new reality. It sucks every time a young person is killed!
Oct. 9, 2014

MariaChappelleNadal
@MariaChappelleN
I'm glad that people are focused on baseball, but those of us trying to save young lives don't get that pleasure right now. #HumanityFirst
Oct. 9, 2014
The president of the Board of Alderman, Lewis Reed:

Lewis E. Reed
@PresReed
Just met with parents of 18yr old young man shot on shaw tonight. Father holding up.
Oct. 8, 2014
In response to a question if the area's alderman was at the scene of the shooting:

Scott Ogilvie
@ward24stl
Peace to all my friends in Shaw & all of STL tonight. Empathy towards all people who are victims of violence. Don't cast the first stone.
Oct. 8, 2014

Scott Ogilvie
@ward24stl
I have no idea what happened precluding the fatal shooting, but I did see police later show much restraint in the face of hostility.
Oct. 8, 2014

Scott Ogilvie
@ward24stl
So many conflicts quickly escalate to serious violence. We all need the bigger perspective that everyone is a son, daughter, friend, person.
Oct. 9, 2014
Christine Ingrassia, 6th Ward alderwoman:

chryssi
@chryssi
Protests escalating thanks to a few drunk loud mouthed white kids who also happen to be the ones who wouldn't move for an ambulance.
Oct. 9, 2014

chryssi
@chryssi
The @SLMPD are handling things much different/better than I saw in the county, even while getting majorly antagonized.
Oct. 9, 2014

chryssi
@chryssi
SWAT here. This is an unlawful assembly. If you don't leave the street, you will be arrested. Almost every one goes. http://t.co/kJgiB4QDzl 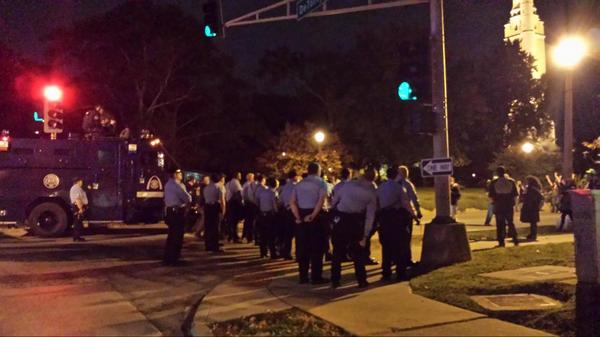