As outlined in Nicholas J.C. Pistor's article from the Wednesday night meeting, what was supposed to be a meeting to gather public comment for a proposed civilian oversight board for the police department plunged into chaos.

Antonio French
@AntonioFrench
Packed house in the hearing room tonight. People from both sides of the issue here to speak about Civilian Review legislation. #democracy
Jan. 28, 2015
Antonio French is the alderman for the 21st Ward. @Citizens4THubbard is the Twitter handle of Tammika Hubbard, alderman in the 5th Ward. 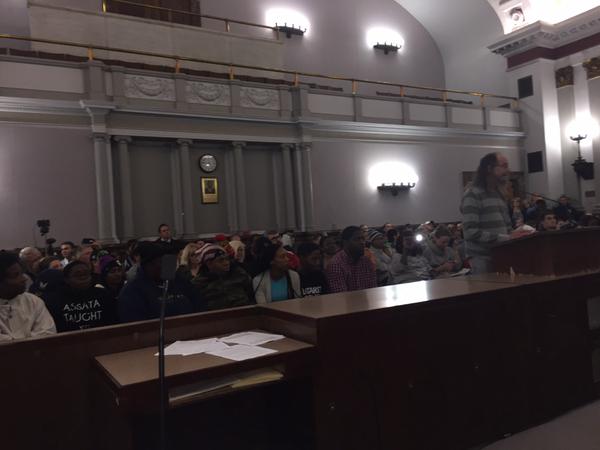 Why So Serious?
@The4th_Duck
Jeff Roorda wears his I Am Darren Wilson bracelet at the meeting http://t.co/B8PAqqRl26 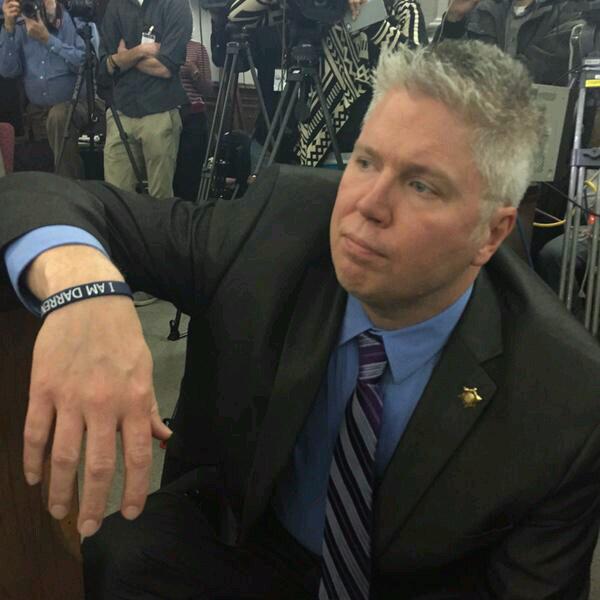 Citizens4THubbard
@Citizens4THubb
Like seriously to show up in a Darren Wilson arm band incited this http://t.co/1URp41mbIW 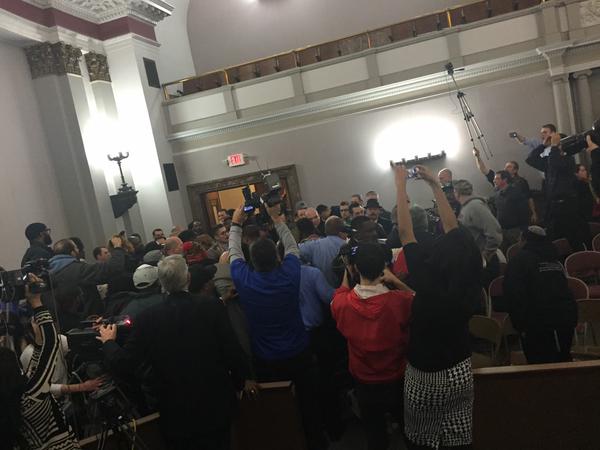 Jan. 28, 2015
Some meeting attendees said that Roorda shoved a woman - or two women. Video from Bassem Masri (starting at about the 59-minute mark) shows crowd members talking and shouting during testimony, then Roorda asking for order. Masri shouts expletives as Roorda tries to move up the aisle, attendees stand up and pushing starts. Another view of the outburst can be seen in this video (near the 17:30-minute mark).
Before the eruption, Pistor noted the atmosphere in the room:

Nicholas J.C. Pistor
@nickpistor
Some in crowd get enraged when someone disagrees with them.
Jan. 28, 2015
After the meeting:

Antonio French
@AntonioFrench
The behavior of union official Jeff Roorda tonight was deplorable, and disrespectful to the fine men and women he is supposed to represent.
Jan. 28, 2015

Antonio French
@AntonioFrench
We saw once again tonight how fractured our city remains. We have a lot of work to do. I believe a strong civilian review board can help.
Jan. 28, 2015

Antonio French
@AntonioFrench
Supporters of reform must understand that opponents will try to provoke you, get you off message. Be smart. Be disciplined. Resist. And win.
Jan. 28, 2015

Chris Carter
@ChrisCarter3
The tension is at a all time high between @SLMPD and the citizens of Stl.
Jan. 28, 2015

Citizens4THubbard
@Citizens4THubb
Were in a bad place right now.,,, there's no faith in our system! We need to fix this and fix it NOW!!!! Or we will never move forward
Jan. 28, 2015
One protest organizer, Charles Wade, said:

Charles Wade
@akacharleswade
I am not anti-police but I am anti-bully and the police have becomes bullies in #STL, @AntonioFrench.
Jan. 28, 2015

Charles Wade
@akacharleswade
I don't expect anything less from the man that represents them when the people he represents behave very similarly, @AntonioFrench.
Jan. 28, 2015

Antonio French
@AntonioFrench
@akacharleswade We need oversight and accountability. A strong civilian review board will help.
Jan. 28, 2015
As noted in the article, many demanded Jeff Roorda's arrest.

Chatty Antisocialite
@chattyantisoc
@chriscarter3 @AntonioFrench Interested in knowing what u are going to do as alderman re: the assault u just witnessed @city hall?
Jan. 28, 2015

Chris Carter
@ChrisCarter3
@chattyantisoc @AntonioFrench @city we made sure that the woman who was assaulted filed an official complaint and report. Then...
Jan. 28, 2015

Chris Carter
@ChrisCarter3
@chattyantisoc @AntonioFrench Talk with the correct people to get him arrested.
Jan. 28, 2015

Chris Carter
@ChrisCarter3
@chattyantisoc @AntonioFrench @city We were also confused on why he wasn't arrested.
Jan. 28, 2015

Chatty Antisocialite
@chattyantisoc
@ChrisCarter3 @AntonioFrench I'm confused. If I assault someone in a room full of witnesses I'll be arrested on the spot.
Jan. 29, 2015
Richard Callow is a political consultant; @Chrissi is the Twitter handle for 6th Ward Alderman Christine Ingrassia.

Richard Callow
@publiceyestl
Too much rude. Too much loud. Too much shoving. Not enough gavel.
Jan. 29, 2015

Uffda Jen
@UffdaJen
@publiceyestl We have a gavel at the neighborhood board meetings. It causes more drama than good :)
Jan. 29, 2015

chryssi
@chryssi
@UffdaJen @publiceyestl I was appalled by the disrespect attendees had for people testifying and nothing was done to help maintain decorum.
Jan. 29, 2015

Richard Callow
@publiceyestl
@UffdaJen Think of "gavel" in the sense of planning ahead and setting a tone early. By the time the snacks are being tossed, it's too late.
Jan. 29, 2015

chryssi
@chryssi
@UffdaJen @publiceyestl nothing can change for the betterment of the city until we truly listen to one another.
Jan. 29, 2015